My roommate has Cancer.

And it fucking sucks.

She is a 22 year old student who hoards mugs in her room (we know you do, once we had to rescue some from that den of despair because we were drinking our tea out of wine glasses, which, while fancy, was going to result in exploding glass and you had like 20 in there….bitch), does stand-up comedy, wears loud/funky print dresses and is generally an awesome person who streams TV on her laptop (which is confusing because once i heard shouting in there and I thought her and her boyf were fighting) and only leaves her room when necessary (uuuuhhh sunlight noooo).

I have lived in a floating bubble my entire life.

I’ve never lived anywhere long enough to see people get sick with anything more intense than the flu, because I’ve always moved around so much and have been away from it all (like that time my best friend got DVT and had to get injections every day in her bum…sorry loser, i’m in Canada drinking maple syrup and eating Poutine…hope you’re okay and stuff though… and like…love you…?).

Maybe I see on Facebook that someone is ill, or maybe my dad calls me and tells me someone has passed away, but my life has been pretty sterile in terms of difficult life issues. It all has seemed very removed and distant from my every day existence.

I will be 25 in October and I’ve been to one funeral in my life.

So to say that Cancer in my apartment has come as a surprise/shock would be an understatement.

I’m an emotional person (no…really?) and I know that on this blog and in my life I use a lot of sarcasm/humor to mask how I really feel, but I legitimately have not known how to process this recent turn of events.

It is not MY Cancer, and I don’t think this is an excuse to get all Soap Opera up in here.

But what the actual fuck.

I’m scared for her.

Cancer needs to back off.

So, after feeling pretty damn roller-coaster-glass-case-of-emotion-y and feeling like I-can’t-write-about-this and I-don’t-know-how-to-deal for the last couple of weeks, a very good friend of mine told me I shouldn’t be afraid to write about this. And to approach this issue with the humor my “leaves-dishes-in-the-sink-because-they-are”soaking”-yeah-right-good-one” roommate would appreciate.

At the risk of offending everybody, i’m sorry in advance.

Amazing way’s to throw your Cancer in everybody’s face so you can get what you want: always.

1. Getting out of a Parking Ticket:
I’m sorry officer, I was on my way to my Cancer Doctor appointment and ran out of time so I parked illegally. It’s pretty hard to find good parking spaces, what with the Cancer and all.

2. In relationships:
Oh we’re having a fight? And i’m in the wrong? Are you forgetting a little something called I HAVE CANCER. That’s what I thought. Apology accepted.

3. Getting people to go the extra mile for you:
Those shoes are the last pair and they are on hold you say? That’s a shame. Man this Cancer has been getting me down, I feel like if I had those shoes I’d be able to face this so much better. Sorry? Yes I said I have Cancer. Oh you don’t normally do this, but I can have the shoes? Thank you. This is a totally and completely unexpected turn of events.

That’s all I got humor wise on this un-funny issues.

The amazing thing about my Roomie (and her boyf who is going through this too really) is how strong she is being. Her attitude is: this sucks, but i’m getting on with it and its 2013. I’m dealing with this.

It’s really one of those things that makes you want to hug your loved ones closer, think about what’s really important, and gives you a kick in the arse for not living each day with all the potential we have.

I have my fingers crossed that she is going to be okay, and I will continue to send her amazingly inappropriate texts, because that is how I do.

So roll with the (unicorn) punches, and make the most of it. 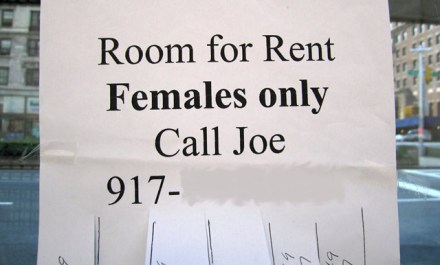 I live in a really cool part of Toronto. Sandwiched between little Italy and little Portugal, close to Korea town (I eat pretty interesting take-away week to week). I love my apartment, in which I have the tiniest little room at the back of the house off the kitchen. I don’t mind my little room, I don’t really have much stuff in this city. I find that the less space I have, the less clutter and THINGS I acquire. So when both of my roommies told me they were moving out, I weighed up moving into one of the nicer rooms in our apartment.

My rent is the cheapest I have ever paid since I began paying rent. It costs me for one month, what it would cost me for 2 weeks in Sydney, and is a third of what I would pay for even a miniscule place in Hong Kong.

I decided with no guaranteed employment after camp in August, and with a bit of a road trip plan in the works for early September with Canadian Boyfriend, to stay where I was.

So now, lets discuss the hunt for new roommates.

Aside from the extremely stressful timing of this whole shenanigan-astic fiasco (what with me leaving for camp in a couple of weeks, and having a sublet) and just the general pain-in-the-assery associated with change, I was eager to tackle the task of finding two people to move into what is now my home.

I put out a ping online to friends and friends of friends. No bites. Bad timing. Lots of people looking for new digs for the start of September but alas July 1st, you were not the prettiest pig in the pageant. Its okay. Have a cookie.

And so I turned to that big aquarium of rare and bizarre creatures in the sky:

And boy did I get a response!

I guess our rent is pretty reasonable for the area and the two rooms going are decent sized. I received 20+ emails in the first 3 hours. I was just happy that people were interested and I wasn’t going to have to scrape the barrel for people or die alone… wait…what?

I was pretty upfront about the place, what I’m like and the type of person I was after. I asked for people to tell me a little bit about themselves when they emailed me. The people who wrote “is the apartment still available?” or “I have interest. When I see the place?” and didn’t introduce themselves didn’t get an email with any further details.

But the ones who sounded normal, guys or girls, I was willing to give them the shot and show them around.

It just goes to show that anyone can represent themselves well on paper.

Perhaps with the guy that came first to look around. Tatoo sleeves, and insane scars all over his face from when he used to have 30+ piercings ABOVE the belt. Okay. Had a strange energy about him. Ex Cabinet maker, turned Paramedics student. I decided I better keep notes on all these people as I’d never remember them all. Beside his name I wrote “Nice. But kind of seems like that normal guy who would become a seriel killer.”

Sweet, shy, Scottish guy who moved to Toronto around the same time I did. Cross eyed (me – extremely awkward and not sure where to focus when speaking to him – but no problem as he didn’t keep my eye for more than a second). Told waffling stories about things his grandfather said, or a random, completely out of context funny moments recalled, with no pretext or set up…

Really nice, kind of dweeby guy who kind of reminded me of Howard from ‘The Big Bang Theory’. Works at Medieval times (a restaurant EXPERIENCE with live horses and jousting competitions, serving wenches tankards of ale…) as a trumpet player, studies music at University. Told me about his very shy, sweet girlfriend who might come and stay now and then. Yep fine no problem. This guy was looking like a winner… but just as we got up to go, his craigslist started to show.

“Oh there is one more thing” he begins, “I’m not sure if I should mention it…” he trails off.

Me: so friendly and encouraging, really think this guy is nice: “Go ahead. Be open, what is it?”

Him: “well… it’s not that my girlfriend and I have an open relationship really but…occassionally there would be a random person coming home with me.”

Me: (Is this guy telling me he kind of cheats on his girlfriend?) “Ok….

Him: “Oh! It’s not cheating… My girlfriend would be there too…”

Him: “Not very often. But on Occasion. I thought I should mention it…”

Me: (TOTALLY Flustered) Right… okay so…. uhm just out of curiosity boys or…girls or… (WHY DID I ASK THAT?!)

Him: “Oh! Both! Sometimes at the same time rarely.”

He blushes. I blush.

And I’m not against whatever it is he needs to do in the privacy of his bedroom. But… in our first meeting? In the first 30 minutes of getting to know the guy. Don’t get me wrong, I’m thankful he said it, because he was top three.

Thankfully, since then, I found two cool girls who are happy to move in.

I dipped my toe in the craigslist pond, and lived to tell the tale.

We’ll see how this all works out.