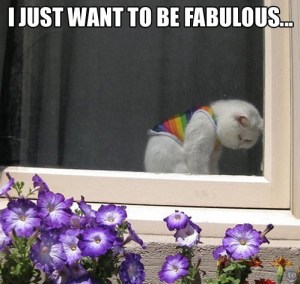 I have two younger brothers, 23 and 19 and among their many fantastic attributes, (including courage, intelligence, amazing good-looks, and the fact that they get to be related to me) they both happen to be rainbow spewing, Homosexual-types.

I’ve written in the past about how I struggled when they first came out. In middle school and high school, I was guilty of using words like “gay” in a negative context (“that’s so gay”) and it was really my ignorance and youth (although that’s no excuse) that made me think this type of thing was okay. I was tolerant of Gay people, I just never really thought there would be some in my family, and I didn’t really think about their rights. Being the selfish young adult I was at the time this was all happening, I thought that I was somehow affected personally when they came out.

Certain issues don’t strike you until they become personal, and you have to shift the way you think. When somebody close to you that you love, suddenly announces that they are different than the person you thought they were. It can be kind of hard at first. It would be like if I told my parents I was converting to Hardcore Judaism after being a pretty mellow agnostic/atheist my whole life. They’d be like… this is different…can we still have Christmas?

Being Gay in my family is pretty much less of a big deal than being religious. In fact I think my parents would prefer it.

Seriously, you want to join my family (no you don’t, we’re crazy).

So this Shenagantics (thats shenanigans and antics for those of you not vibrating on the same frequency as me) in Russia has got me to thinking.

Why are we so afraid of people who are slightly different from us?

My Gay brothers are better than your Straight ones.

1. Have you ever been to a gay bar? Seriously, it is the best fun you can have with most of your clothes on.
Sweet music, hot guys, nobody groping you (well…no guys groping you). I want to go to a gay bar every night, and guess what? I can, because I have gay brothers and I’m allowed. So, no big deal, enjoy your lame sports bars with your lame straight brothers. Bring on Madonna!

2. My brothers are never going to impregnate a girl by accident and stress my Dad out.
We’ll leave the accidental pregnancies to yours truly.

3. Honest appraisals of my boyfriends .
Would NOT bang. Really? Yeah yuck. Sigh-Okay. “Hi, it’s Paris. My brothers say you are fugly and we need to break up now. Yup seriously. Cool. Bye”

4. I’m learning so much about men – from men.
You do what-now with the where-now??

5. My brothers will never bring a girl home to steal my only-girl-in-the-family status.
Sure you may be the Queens, but I will always be the Princess, and therefore, I can do no wrong, nor be compared to any sister-in-law.

I have never met someone with such a capacity for accepting others like my baby brother Angel, nor someone with such a strong sense of self as my brother Kip. This blog, like most of my blogs, has a tongue-in-cheek element, but the truth is, I learn from my brothers every single day, and I love them more for the fact that they looked this world (which can be cruel and harsh and a struggle) right in the eye and said “bring it, this is me”.

They aren’t perfect, and I would still punch them as hard as I could in the arm if they tried to change the channel when I am watching my secret favourite show “Say yes to the dress” (then I would run away because they are both over 6 feet tall). They are the boys (men now) that I grew up with and I am so proud of them every single day.

It’s hurtful to read articles about what’s going on in Russia, or about Hatred towards people who are just getting on with their shit same as everybody. When I read ignorant blog posts or Facebook status’ or see evidence of injustice and intolerance, I am sad for the people who obviously don’t have the love or intelligence to see that we’re all just people.

They obviously haven’t met my brothers, who are amazing dudes that just happen to like other dudes.

I don’t think it matters who you’re taking home at night, so long as you are happy and they are happy and somebody is buying my brunch.

No Freedom until we’re equal, you’re damn right I support it.