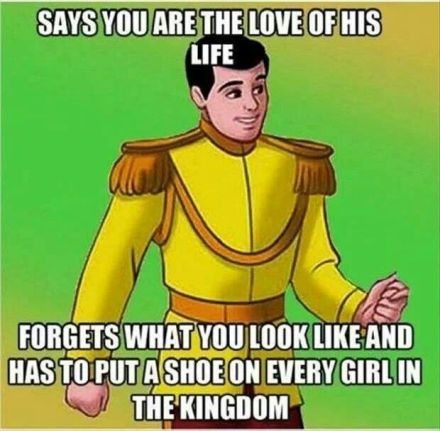 I love Fairy Tales, Cinderella in particular was always a favourite of mine, and clearly Hollywood’s too, because many of the chick flicks being churned out by the entertainment machine perpetuate some form of this legend.

I mean, what is not to love about Cinderella?

That girl starts off ordinary and becomes the Princess of a realm. And there is a handsome prince and shoes. What more could you ask for??! Except maybe the Fairygodmother could turn that pumpkin into a coach sized chocolate fountain. Justsaying.

It’s a rags to riches story that I would totally watch on TLC if  it were a reality show and if I had cable…or a TV (it’s true, this wannabe TV personality doesn’t currently own a Television and hasn’t done for two and half years…sorry it’s called netflicks and the internet…plus who has time to sit through commercials? not this gal)

And it used to be that the most outrageous part of the Cinderella story was that the animals could talk and a pumpkin turned into a coach. Or perhaps because of the Meme above you’re thinking the craziest part is that he fell in love with someone after a few dances (like thats never happened to any of us on a friday night…) and then forgot what she looked like (again…we’ve all been there). Or maybe the crazy part is that there was a fairy godmother (it’s called your parents and the magic they work is putting some extra money in your account so you can eat). Or maybe the fairytale bit is that Cinderella put up with her StepMother and StepSisters shit for so long (hellllll nooooobitches, especially not if we’re all on the same cycle).

The most outrageous part of the story is that the Prince didn’t wake up the next day after the ball and be like…”whaa? Woah man I was so drunk last night. Lolz”, and then went hunting with his friends, singing songs in the wilderness, playing croquet, highfiving each others asses in a semi-erotic way. Or whatever. And Cinderella was left disappointed that the Prince didn’t bother to find her, faced with the idea that this going to balls and hoping to meet a Prince thing was going to make up the rest of her life for the foreseeable future. Because she’d been with all the village boys and…meh.

Or maybe Cinderella totally snuck out of the ball on purpose. Like the Prince was getting a bit handsy at the event and she’d decided “mmmmnope, I’m not going to bang this dude” (we’ve always decided, pretty much within the first 30 seconds if its going to happen or not) and then it was super awkward when he showed up at her place. And turns out he’s rich so she’s like “fuckit. no pre-nup” gimme those shoes.

Oh please. Don’t look at me like that. I’m not some bitter old crone, I’m (semi) kidding.

I just wonder what Cinderella would be like in a modern setting.

Girl sneaks into party she wasn’t really invited too. That takes some balls. Maybe she’s at home pre-drinking with her friends and she’s like “SCREW my sisters. I’m totally going.” She gets there, she’s wasted (she thinks she drove there in a magic-ed pumpkin – hello?!) and the Prince is there (he’s totally out-of-it and he hates all the people his parents have invited – he knows they’re just trying to set him up with their friends ugly daughters) they spot each other on the D floor. Awkward grinding/humping in front of all the older people.

They go out on the terrace, making out, Cindy sees that its almost midnight and her Step sisters have a curfew so she totes has to be home before them, she’s also potentially got puke breath. Prince dude can barely see straight – can’t even remember what the girl looks like. But he’s got her name. She bails. So drunk she leaves her shoe behind (classic hot mess move). He crashes.

Both wake up thinking: wow, what a special night.

Now if it was 2013, Prince Dude would totally just hop on FB and stalk the shit out of this “Cinderella” notices they have two mutual friends (ewwww he hates those skanky step sisters).

Maybe he friends her. Maybe he doesn’t. Maybe he sends her an awkward private message being like:
heyyyyy I got your shoe.

Disney, call me if you want me to help write the re-make.

3 thoughts on “Romance me like one of your Gym Socks”